… because I got paw pads. 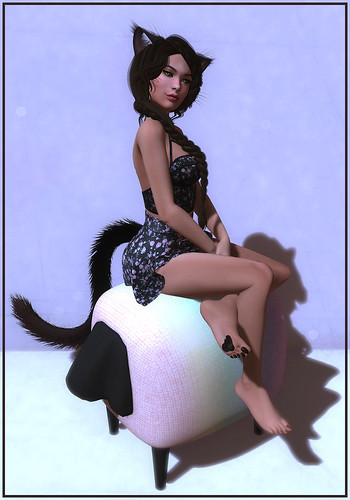 Yes, I’m still alive. I have been in SL from time to time. Even had good intentions to blog some of the stuff I bought, but it just didn’t happen. Until now!

The item that finally got me blogging, are my new paw pads by Slink. I don’t think they are actually a new item, but they were recently updated. For some reason, their existence had escaped my notice until now.

The rest of the picture is filled with the afore mentioned stuff I was intending to blog. Hair I got at Hairfair, outfit from a past Fifty Linden Friday, skin that was newly released when I bought it, pose from a closing sale and a rainbow sheep from the Pulse fundraiser.

I also got myself a new head! (One of those things you only hear in SL) I recently changed from Lelutka Karin to Catwa Helena. Mainly because the Catwa one has Omega support, so it has more options for customisation.

That also forced me to start using mesh eyes. So after reluctantly saying goodbye to my old system eyes, I got myself some mesh ones from a store called Puppy. This is actually a store for furry avatars, but with nekos not being fashionable any more, these stores are pretty much the only option for finding good feline parts.

And with that, everything is up-to-date again.

Going to the Movies 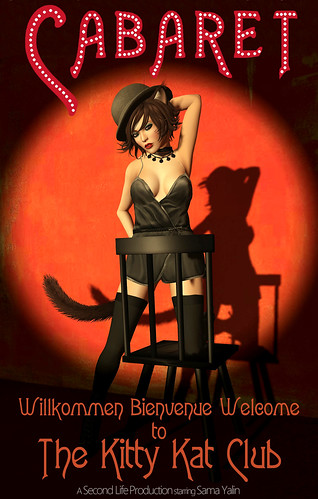 So many blogger challenges, so little time! But as I participated in the 2013 version of this challenge, I just knew I had to do this one.

I again decided to go with a classic, the 1972 musical film Cabaret. It’s shocking how relevant the message of this musical still is, even after all these years.

I didn’t attempt to do an exact copy of the original poster. Because there seem to have been a lot of different versions over the years. But hopefully my attempt does get the overall look right.

Never Have I Ever 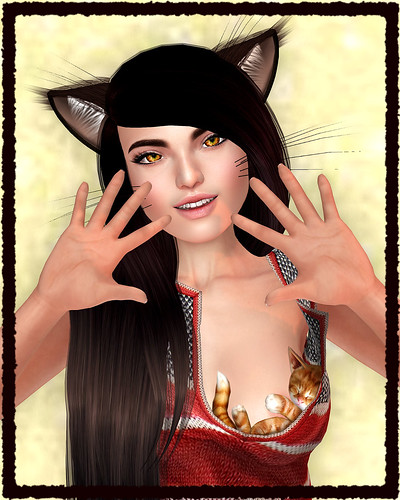 Ms Singh is attempting to bring back the Monday Memes. I figured this might be a good time for me to attempt to bring back… well, my blog in general really.

This week’s Meme is a game of Never Have I Ever. I game a have never played before!

And with that I can now state that I have played the Never Have I Ever game. 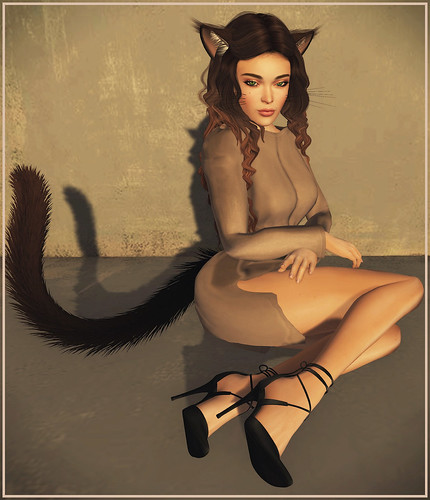 I dipped my toe in Second Life again today and decided to get dressed. I took a picture of that and edited it.

And then I posted it! Wow, I usually don’t get that far these days! It’s a miracle!

🙂 I even did credits:

Posted in Look Of The Day

… because I found a group gift while cleaning my inventory. 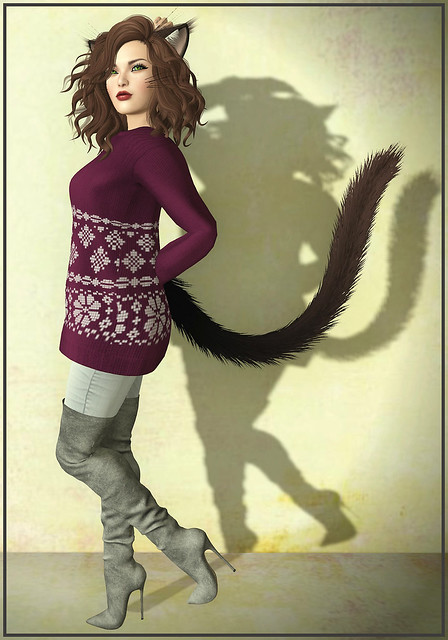 A group gift from Hucci to be precise. I found it in my “still need to unpack this stuff” folder, so I have no idea when exactly this gift was sent.

Remarkably enough I just bought a very similar pair of boots in RL. So I decided to create a look I might wear in RL as well: with skinny jeans and a long sweater.

Posted in Free stuff, Look Of The Day 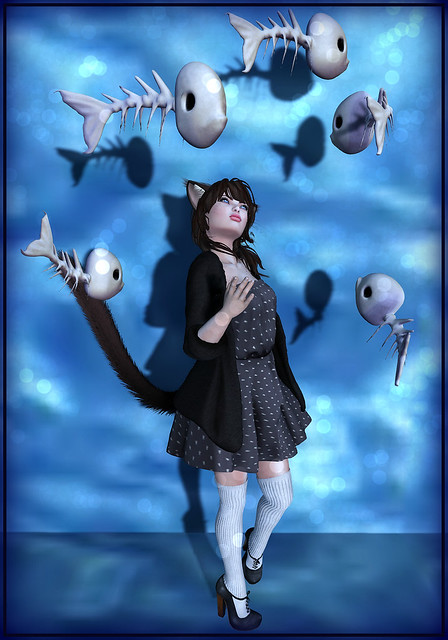 Okay, I wasn’t. These fish were already like this when I bought them. They just inspired me to create this picture.

What do you mean, I have a bit of fish stuck between my teeth?!

… Week 10 of the SL DisneyBound Challenge. 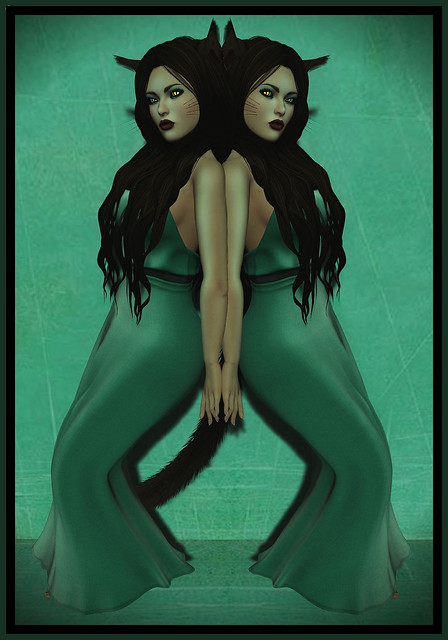 I should be renaming this blog to “The Lazy Blogger”! But let’s ignore the layer of dust covering this blog and move on to more interesting things.

While I’m not interested in blogging, and trying to keep up, with what is the latest and greatest in Second Life these days, I do still like dressing up my pixel-doll. So here is the next instalment of that Disneybound Challenge I started ages ago.

But because I’m very much like my half-cat avatar, I did the pictures last week… and then wandered off to investigate a particularly interesting-looking sunbeam…

… because Jane is back. 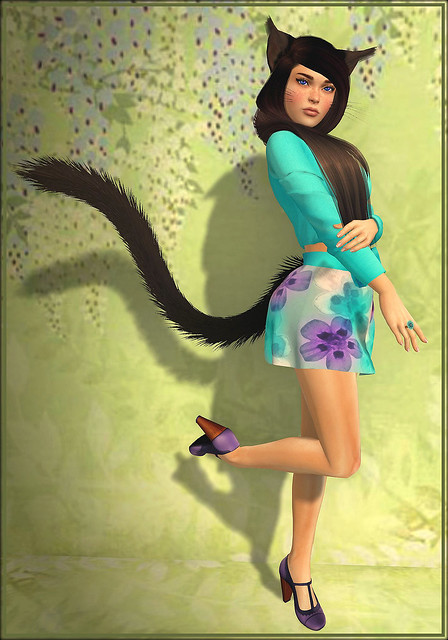 Being only a part-time resident of Second Life has both good and bad results. Good result is that I get a lot more done in RL. Bad result is that most of my group notices get eaten and I have no clue what the current events in SL are.

That’s why I only now found out that Janie Marlowe has reopened her store Jane.

I’m a long time fan of this store. I was already shopping there before it was called Jane. And it was where I bought my first ever rigged-mesh garment.

Posted in Look Of The Day, New stuff

… because I actually left my skybox! 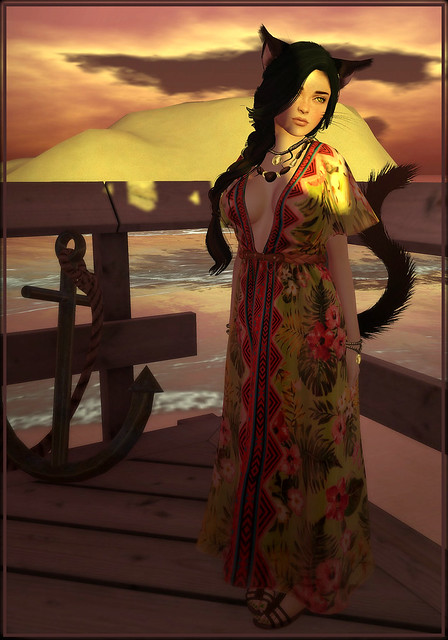 These days I only blog if and when I feel like it. So I guess I felt like it 🙂

I haven’t spend that much time inworld. But when I am online, it’s usually spend on my little platform in the sky. Playing dress-up, rearranging pixel furniture… you get the idea. Considering how “beachy” I ended up looking after my latest round of dress-up though, I had to find a bit of coast as my backdrop.

Yes, I actually left my skybox. Shocking isn’t it?

Also, I’m still wearing my mesh head. I’m really starting to get used to it. I have discovered some drawbacks though. First one being the lack of facial expressions. It’s not like I used to use expressions all the time, but a bit of a smile would be nice to have.

The second one, I only discovered when I started writing my credits. Normally I just check my “current outfit” folder to find the necessary information. But of course the Lelutka head uses appliers, which don’t show up there.

So with that in mind, I’ll tell you I’m wearing some sort of lipstick. Because I can’t remember what applier I used. *facepalm*

Posted in Look Of The Day, Pretty Pictures

I Got a Head

… a mesh head, that is. Something I thought I’d never do! 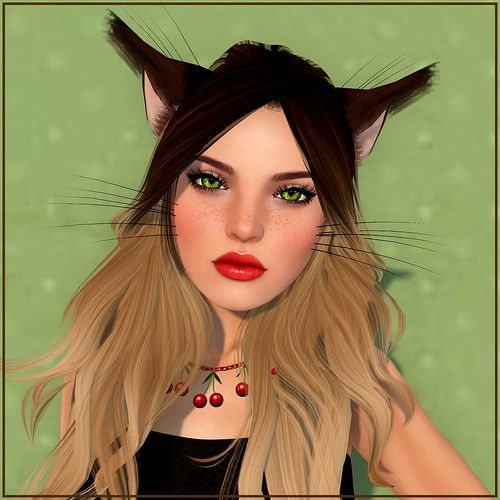 Yes, I got on the bandwagon and got myself one of the mesh heads by Lelutka. Karin to be precise.

First of all, I’d never tried a mesh head before. So there was certainly a bit of “Ooooh, new and shiny!!!” going on. Also, this head was simply the first one I liked the look of. Some others just weren’t my taste or they looked way too grumpy. (Being a mesh head is apparently annoying business.)

Second, I’d been kind of unhappy with my face lately (boy, does that sound shallow!) and I was looking for a change. I always felt my face looked fine from the front, but a bit scrunched up when view from the side. And my nose looked like one you can only have in RL if your last name is Jackson. Unfortunately I quickly discovered that I’m no good at making face shapes. So I tried mesh.

I have to admit, that getting a new face takes a bit of getting used to. And even though there are only 2 sliders for changing the shape of the head, I still fiddled around with them for days. But I like the end result. The only thing I didn’t like were the eyelashes that came with the head. I felt they looked like black toothpicks sticking out of my face. So I turned those off and used my own.

I think this new head might just be a keeper.